My fellow authors and I are so excited about our collaboration, we’re running a Rafflecopter and giving out Amazon gift cards (Three hundred dollars worth). 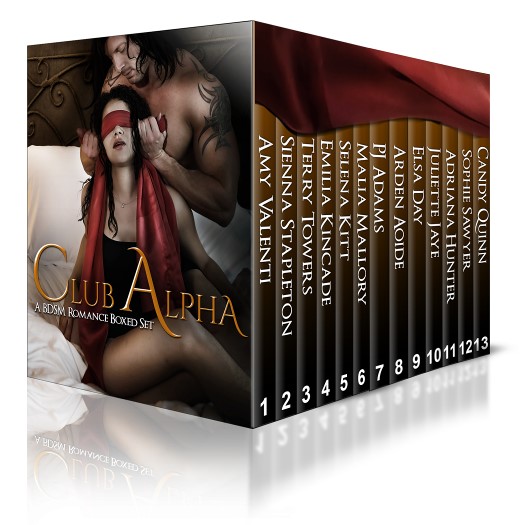 Want to take a peek behind that red velvet curtain?

Come join our Club Alpha authors as they take you into the inner sanctums of some of the hottest, most exclusive clubs you’ll ever have the privilege of witnessing. Some come for the discipline, some come for the thrill, some come to find sweet passion, but all go away initiated in the ways of love.

Surrender to the dominance of these thirteen novels from bestselling authors including New York Times and USA Today bestsellers Adriana Hunter, Selena Kitt and Terry Towers.

Club Alpha isn’t a place–it’s a state of mind you’re going to want to visit again and again.

Claiming His Tease by Amy Valenti – Josh is all Dom and hot as hell, and he’s prepared to wait for Lena to come to him. All she has to do is kneel at his feet, and she’ll be his. But is she too stubborn to give him her submission?

Breaking Boundaries by Sienna Stapleton – With the hopes of expanding her intimate horizons, Beth books a weekend at a therapy retreat. Once there, she quickly learns that the weekend will be much more than she bargained for.

The Billionaires’ Club: Deceiving Him by Terry Towers – Going under cover, Lexie finds herself in a world like none other. After she meets the hot billionaire Vince and is introduced to unimaginable pleasures, can she still go through with her expose?

Club Soria by Emilia Kincade – Maya’s life is falling apart. She runs away to Thailand to find some peace. When she is invited to Club Soria, she doesn’t know what to expect. Her ‘awakening’ catches her entirely by surprise.

The Sybian Club by Selena Kitt – Tasha convinces husband, Max, to buy a Sybian, starting a club to pay for it. Friend Ashley helps but Tasha doesn’t know how to tell Max she wants to add more to their private life than just a new toy.

His Desire, Her Surrender by Malia Mallory – When Marcus tracks Tabitha down to resume the sizzling affair they began in the islands, can Tabitha prove that she has what it takes to be both his partner and his submissive?

Escape by PJ Adams – Just who is the masked stranger at Club Extraordinaire and what is it that draws Julie so powerfully? Is it the way he’s so confident and masterful? Or is it that he reminds her so strongly of her ex?

Pavlov by Arden Aoide – Tyrone Parker had obstinacy down to an art and was the reigning champion of Having the Last Word. He had his own definition of Domination that had women running away fast. Until the one that stayed.

Control: Masters of the Sanctuary by Elsa Day – When Amy sneaks into the sanctuary, she has no idea what she’s in for. She runs into trouble, and Master J is the only one who can help her. But his health comes with a price: her total submission.

At the Billionaire’s Command by Juliette Jaye – Recent small town transplant to New York City Sophie never expects to hook up with the billionaire boss of her company. But the even bigger surprise is when she finds herself falling in love with him.

Rough Edges by Adriana Hunter – I didn’t expect to wake up, unable to move. When he told me that I was a player in his wicked game I knew I had made a mistake. I didn’t ask for this. I didn’t want it. At least not in the beginning.

Club Red by Sophie Sawyer – When curvy beauty Tori visits Club Red for no-strings fun, the last thing she expects is to find everything she ever wanted.

Precious Pet by Candy Quinn – What started as a way to make some extra money ended with a demi-god opening college student Rachael’s mind to the bliss of submission.

I know many of you have been so patiently waiting for new installments in the Mia’s Cop Craving series and they are here. This week, Books 3 & 4 are just 99 cents. Book 1 is 99 cents as well. All are available to borrow on Kindle Unlimited. 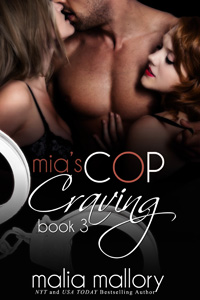 Mia knew that look. Oh, did she know that look. His expression told her he was thinking about handcuffing her to the headboard of her bed.

When handsome man in blue, Rogan, agreed to fulfill Mia’s intimate fantasies, neither of them knew exactly where the road would lead. But Mia craves her hot police officer and their naughty cop adventures. She’s not giving him up until he’s made her every fantasy come true—if then. When hot cop Rogan lines up a gorgeous redhead for their sensual adventures, Mia can’t believe her luck. 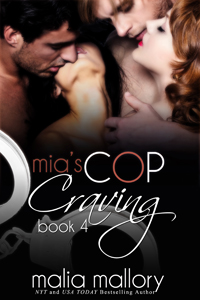 Rogan’s eyes drifted down her body and back up. “Your hair. Take it down.”

What happens when you bring together two hot cops with their ladies? Find out when Mia, Rogan, Jeff, and Gillian decide four is exactly the right number for their sensual adventure.

Just in case you missed it — the story that started the series. 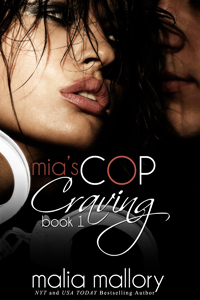 “Mia,” Rogan whispered, “tell me what happens in your fantasy.”

Mia’s most secret fantasy is to be with a hot cop. It’s an intimate dream she can’t stop thinking about. She just has to locate a hot police officer who knows the right way to use his handcuffs on her.

After heading to a local cop bar to find her man in blue, Mia meets Rogan, who is more than happy to learn that this girl-next-door is hiding a wicked siren under her clothes. Mia can’t wait to get down and dirty with Rogan, her own policeman.